Labour Commissioner To Host Conciliatory Talks between Unions and Government

Labour Commissioner, Mr. Cyrus Griffith, is expected to begin conciliatory talks in the dispute between Government’s Negotiating Team and the Grenada Technical and Allied Workers Union and the Public Workers Union, on Thursday, October 17.

The conciliation talks come on the heels of the deadlock in negotiations declared by the GNT last week, given the wide disparity in proposals presented by either side for wage increases for public officers.

The unions on Monday put forward a new proposal with a point five revision of demands.

Head of the GNT Oliver Joseph on Wednesday said if the movement was made in time for the October 8th meeting, the matter would not have been referred to the labour Ministry.

Pre-conciliation talks are expected to be held separately with each side on Thursday, ahead of the first conciliatory meeting on Friday.

The Labour Commissioner has asked the disputing parties to provide their wage increase proposals and rationale, ahead of this week’s talks.

The unions are seeking a 25% increase in salary for public officers over the next contract cycle, 2020 to 2023 which is Government says will increase its wage bill by $90 million dollars. 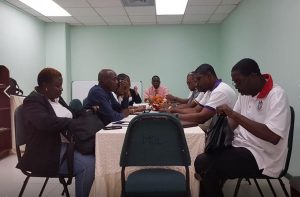