Residents in the La Calome low income housing project are fearful that their access way will soon cave in, if nothing is done to address the high level of erosion, lining the cane planation owned by cane co.

The residents are of the view that due to the rechanneling of the river water, their road is being eroded.

The residents say officials at Cane co dug a drain to divert the flow of water, which is now posing a threat their homes and road with the onset of the rainy season.

Marie Williams, a resident in the area for 9 years, says with heavy rain fall, it is difficult to use the road.

Williams is calling on the MP for the area Oliver joseph to visit the housing project, to better appreciate the residents’ concerns.

“It keeps going… Its mashing up… and I am at an age where if it worsens, I won’t be able to go up higher to get bus to come in,” the elderly woman told GBN News.

She says she wants the MP to see the road, which is continually disintegrating.

Joseph Antione, who has been a resident of the housing project since inception, spoke on the progression of the eroding banks and some of the factors he thinks may have contributed to this.

Antione is calling on all the relevant bodies to address this issue, to prevent anything catastrophic from happening.

“When the rains came down on the 1st of August last year, major debris and items came down this way with the rush of the water. The top soil was lost and is being lost for some time. The problem is it would appear that this problem started when owners or whoever of the land tried to divert or try to make a drain to commandeer the water when the plantation was being established.”

The resident says he wants the owners of the land to take responsibility for what is happening.

Director of Cane co, Graham Williams, when contacted on the concern stated that the company is aware of the situation and is currently in dialogue with the ministry of works.

“I have investigated the matter and I could say we are in contact with the Ministry of Works and we have asked them to come and take a look and we are waiting for them to come,” Mr. Williams told GBN. 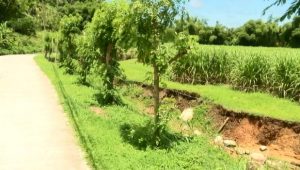