Grenada star athlete, Olympic Gold Medalist Kirani James will be present at Grenada Invitational, though not on the tracks.

In a statement today, chair of the Invitational Committee Karline Purcell confirmed Kirani’s acceptance to represent as an official ambassador.

As the event enters into its third year, Purcell says they are pleased to have the endorsement of Grenada’s most decorated and accomplished Athlete.

Kirani will touch down on home soil on Saturday April 8.

Leading up to the games he will be engaged in a number of activities including the welcoming of foreign athletes and on the day provide expert analysis during the live broadcast of games.

Purcell gave the assurance that all is in place for the hosting of Grenada’s’ third invitational.

Grenada invitational is carded for April 13th at the Kirani James athletic stadium. 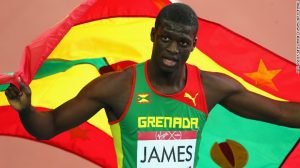