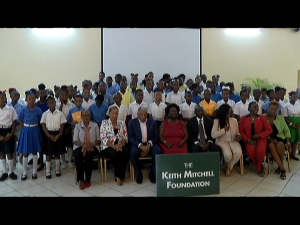 Three years since its founding, the Keith Mitchell Foundation is for the first time providing scholarships for students through their secondary and college education.

Seventy-five students who were successful in this year’s CPEA exams are the beneficiaries, and they were each presented with vouchers during a ceremony at the Grenada Trade Centre on Thursday.

Top performer in this year’s CPEA exams Kimaya Richards Is a recipient of a scholarship from the Keith Mitchell Foundation.

Speaking on behalf of fellow recipients, she gave the assurance that she will perform to her fullest potential.

The foundation which was set up by Prime Minister Dr. Keith Mitchell three years ago, has relieved the financial burden of some parents for the next seven years.

Seventy five students were provided scholarships for their five years of secondary school and two years at the tertiary level.

Students must maintain at least a sixty five percent average to maintain the scholarship.

Dr. Keith Mitchell said today is another very important day in his life, and referenced the challenges of his upbringing, and the importance of obtaining an education.

The PM urged awardees to be responsible in spite of the assistance rendered to them.

He said his intention after retirement is to take the foundation to the next level.

Having provided a one off grant for the past two years, Chairman of the board Sir Royston Hopkin says he saw it necessary to do more.

In delivering his remarks Sir Royston emphasized that nothing that is good is easy.

Seven years of education paid for, should not be taken lightly, he said.

FROM CRADLE TO CANE