H.E. Mr. Justin (Yuchen) SUN, a leading figure in the crypto and blockchain sphere, is best known as the Founder of TRON, one of the world’s largest and most popular blockchain platforms.

Grenada is a key member of the Caribbean Community (CARICOM), the CARICOM Single Market and Economy (CSME), and the Organization of Eastern Caribbean States (OECS).

“It is truly an honor to serve as the WTO ambassador for Grenada,” said Justin Sun. “I look forward to the opportunity to represent Grenada and work with WTO leadership to reinvigorate global trade in various ways, particularly the development of a robust digital economy internationally.”

With the appointment of H.E. Sun as Grenada’s Ambassador to the WTO, the Government of Grenada expects H.E. Sun to use his contacts to promote trade, investment and development opportunities for the country. To mitigate the economic impact of the pandemic, H.E. Sun is expected to promote Grenada as a viable economic destination by introducing advanced tools and methods. And these changes could improve the marketing and promotion of this Caribbean country in the near future. Likewise, H.E. Sun is expected to support the development of human resources, infrastructure and information and communication technology for Grenada’s government. He is also expected to conduct himself in a manner that promotes Grenada’s image at all times. 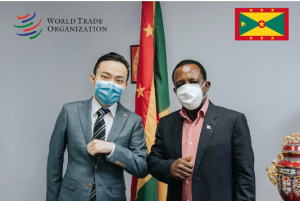