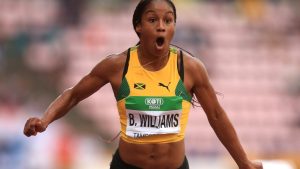 Williams competed in the Jamaican National Senior Championships between June 20th – 21st and awoke with flu-like symptoms on June 21st. Williams’ mother gave her an over-the-counter cold medication – “Pharma Cold and Flu” – which she had previously purchased at a local pharmacy in Kingston, Jamaica. Later that day, Williams declared her use of the cold medication on her doping control form.

In the intervening period between receiving the A Sample results and B Sample results, Williams’ coach, Ato Boldon, had the cold medication independently tested by NSF International Labs in Michigan. Those independent tests demonstrated that the tablets contained hydrochlorothiazide, the banned diuretic. Hydrochlorothiazide was not listed as an ingredient on the cold medication in question, nor would one expect it to be.

In light of the pending selections for the IAAF World Athletics Championships in Doha, Williams now seeks an urgent hearing before the Independent Anti-Doping Disciplinary Panel to resolve this matter fairly and conclusively.

BRITISH PARLIAMENT TO BE SUSPENDED IN SEPTEMBER