The fake profile bearing the name Keith Claudius Mitchell stated, and I quote “Warning: as a result of the crown virus, I will donate over $100,000 to the first 500 people who guess the number in the photo. Unquote

The Fake profile at the time it was detected had already hit 74 shares and five hundred and twenty-seven views.

A press statement issued by the Government Information Service warns the public not to fall victim to scammers. It reads, and I quote:

The Government of Grenada is urging Grenadians to

be vigilant, given the detection of an apparent increase in the impersonation of Government Ministers on social media platforms.

This practice is referred to as spoofing and technology experts define it as “the act of disguising communication from an unknown source, as coming from a known or trusted source”.

The government advises that Ministers are not in the practice of initiating contact with members of the public via private or direct messages on social media platforms. Ministers will respond to queries submitted by persons via private messages but will not initiate contact using such means.

Further, the public is advised that no Government process requires persons to use money transfer agencies to send money to receive any Government document or promise of financial assistance.

The population is advised to stay alert while using social media and to be aware of scammers. Unquote.

This fake profile has since been reported to Facebook for removal.

A personal message from the prime minister posted on his personal Facebook page urged Grenadians to be cautious.

My friends, I assure you that there is only one official Facebook page in my name. The authenticity of the page is verified by the blue tick which appears after my name. Stay safe my friends and be cautious: unquote. 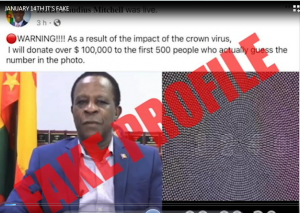