IS THE HEALTH SYSTEM HACKED

Are medical doctors employed by the government of Grenada engaged in private practice within the walls of the general hospital?

Public concerns are being voiced about some practices taking place at the General Hospital involving medical doctors.

There are claims that patients are made to pay exorbitant hospital fees to conduct surgeries at the general hospital.

One case reported is that a patient was allegedly charged $15,000.00 for a surgery to be paid to the doctor for the procedure undertaken at the general hospital using hospital equipment.

In an exclusive interview with Health Minister Nickolas Steele on Tuesday he was asked if government is aware of this type of practice and if this is an acceptable practice.

The minister advised that persons encountering such rip off should report it directly to him.

The same question was put to Minister with responsibility for hospital services, Delma Thomas who told GBN she is unaware of this and therefore is unable to say if this is normal of abnormal practice within the hospital.

She told GBN she must first inquire to determine the facts of this matter. 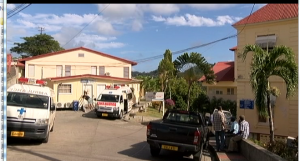