This dumping ground in Clarkes Court Bay St. George’s has become a major concern for one former government minister who resides in the area

A sign that reads, No Dumping appears invisible to those using this area for piling their refuse.

Visible are pieces of concrete, metals, household garbage, and irreparable household appliances among other items.

During the past weeks fingers have been pointing to areas at different points throughout the country turned into Illegal dumping sites.

What people fail to recognize is the effect this can have on the environment.

Personally touched Roberts is speaking out against the act of illegal dumping, as she watch mangroves she replanted in the area being affected.

Private property\land owners are sometimes the ones who suffer as a result as often times they are left to clean up the act.

Another area identified is Morne Toute St. George. One resident who opted to speak to our news team off camera says the culprits come from outer areas and comes there to dump.

Roberts had recommendations she believes can be adopted.

She is saying that each individual must be made to take responsibility for their action. 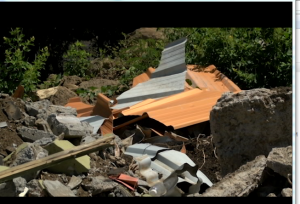