HOSPITAL WING TO BE NAMED IN HONOUR OF DR THOMAS 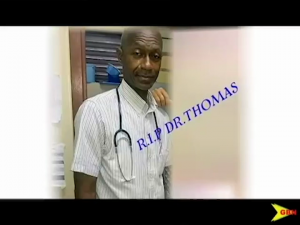 Government has agreed to name a section of the new wing at the General Hospital in honour of deceased medical doctor Winston Thomas, who is also known as the “people’s doctor”.

This was announced last Friday at the funeral for Dr Thomas at the St George’s Anglican Church.

Foreign Affairs Minister and Parliamentary Representative for the Town of St George, Peter David, spoke of government’s decision during his delivery at the service, saying “the best tribute we can pay to Dr Thomas is to build the kind of world and extend the kind of justice, fairness and love that Dr Thomas exuded”.

Minister David who spoke extensively of the assistance received from Dr Thomas over the years, said he believes government’s decision is fitting.

Prime Minister Dr Keith Mitchell who also participated in the funeral service, encouraged Grenadians to follow some of the examples set by Dr Thomas.

Dr Thomas was born and raised on the Carenage, St George’s. He died at the age of 59 on July 27th in Cuba, where he was receiving medical treatment.

At the time of his passing, Dr. Thomas was attached to the Accident and Emergency Department (Casualty) of the General Hospital in St. George’s, where he had worked for over twenty (20) years.