The King is coming home to a hero’s welcome.

After a pulsating, riveting Friday night into Saturday morning watching Grenadian artistes via television as they performed at the International Soca Monarch competition on the twin-island republic of Trinidad and Tobago; Grenadians will get their chance to celebrate with the king himself.

This weekend is shaping up to be another major ‘pick up something’, as Government’s planned national hero’s welcome to greet the famed soca artiste at the Maurice Bishop International Airport (MBIA) will take place on Saturday.

This was announced at Tuesday’s Post Cabinet Briefing, and further explained on Wednesday’s GBN’s To the Point programme by Economic Minister Oliver Joseph.

All 6 Grenadians who participated in last Friday’s completion will be part of the celebrations.

Joseph says since the contestants come from different constituencies, all the MPs will be present to welcome their artistes.

A Welcome reception will be held, followed by a motorcade to Gouyave.

Hollice Mapp “MrKilla”, the International Soca Monarch winner, Grenada’s Cultural Ambassador is expected to arrive to scores of Grenadians on the outside of the Airport for the beginning of the celebration.

Minister Joseph says Minister Kate Lewis in the absence of Culture Minister Norland Cox (who is out of state) has been put in charge of a committee to chair the homecoming celebrations.

The six Grenadian artistes from the spice isle, ensured that Grenada was well represented at the International Soca Monarch.

Mr Killa walked away with the international title, while Mr legs placed third in the power soca category and V’ghn in the groovy.

Mr Killa is the first Trinidad non-national to win the title in the power category.

GBN understands that in addition to Saturday’s festivities, a massive concert is planned for later this month to celebrate the outstanding performance of all Grenadian participants in the ISM competition. 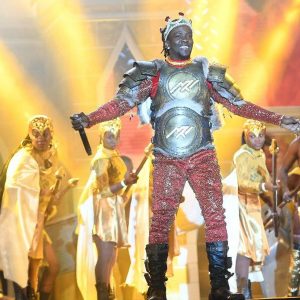