They were among a group of two hundred and five passengers who were stranded in the United Kingdom.

According to information from the Ministry of Foreign Affairs, the repatriated nationals are part of a larger group of CARICOM nationals, who, through a joint effort of regional governments, left the United Kingdom on a British Airways flight early Wednesday morning.

The outbound flight load is shared among several CARICOM countries, with Barbados having the largest share of nationals.

The other passengers are from, St. Lucia, St. Vincent, Antigua and Barbuda.

The British Airways flight, also destined to pick up British Nationals in the region, landed at 3:05 p.m. yesterday, in Barbados.

Other regional nationals aboard the flight accessed LIAT for their respective countries.

Upon arrival at the Maurice Bishop International Airport, the passengers were received by health officials, and immediately tested.

All medical screening after disembarkation will be completed by the Ministry of Health.

Nationals will also complete at least, a 14-day mandatory quarantine at specified quarantine locations, to which they were directly transported. 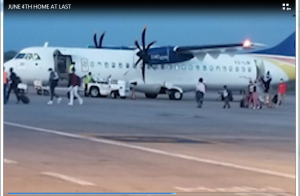 FARM WORKERS OFF TO WORK