One of Grenada’s Historic structures is now in ruins after an early morning fire.

Fire Tenders responded to reports of the fire at the Douglaston Estate in Gouyave St. John at around 4 AM.

The site was a well-known tourist attraction.

The building was totally engulfed in flames that destroyed the entire Buchan and its contents and Guard Hut. Over eight hundred pounds of Coco went up in flames

Three hundred years since the existence of the Douglaston Estate monuments in Gouyave.

It was among the few estate buildings around.

The premises were used as a tourist attraction site with the estate spanning over six hundred acres with a Great house, watchman house, an Office and Overseers quarters.

The boucans were used to dry cocoa beans and also for the processing and packaging of other spices, such as Clove,

Minister for Tourism Clarice Modeste Curwen considers this as a tragic loss to the tourism sector. It is one of those attractions she says they value as one of the better ones in terms of the way its artefacts were preserved.

She  said it is with sad reflection that she ponder on the loss of the facility. It is not something you cannot get again she says. to lose artefacts such as existed at the Douglaston estate, you have lost a lot.

The tourism minister says not long ago they were in discussions with the owners on how the area could be better developed and enhance the tourism product. 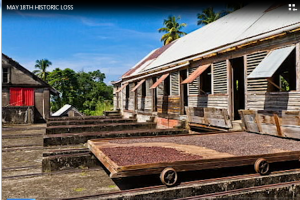