A heat health study conducted in august 2021 shows a direct correlation between high temperatures and increased instances of death.

September is already proving to be one of the hottest months this year.

High-temperature exposure or extreme temperatures have a direct effect on mortality or death in Grenada.

As citizens continue to battle with the apparent heat wave ongoing around the country and in other parts of the Caribbean, Dr. Lindonna Telesford highlighted that a heat health pilot study conducted in 2021 indicated the direct impact of high temperatures on mortality in Grenada.

Contracted by PAHO to develop the methodology to do heat health studies for the Caribbean, Dr. Telesford explained it was one of the initiatives leading up to the development of the Health National Adaptation Plan for Grenada.

Added to the other heat-related illnesses such as dehydration, heat cramps, heat stroke, and accelerated death from respiratory diseases, Dr. Telesford noted increased deaths are also one of the major impacts.

She believes it is a warning despite Grenada and its citizens being accustomed to the warm tropical climate. 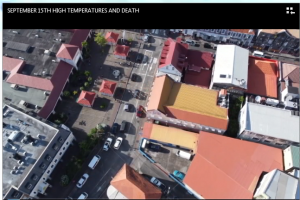