Heads of State and Government of the Caribbean Community (CARICOM) and the Central American Integration System (SICA) will seek to strengthen relations in the face of ‘multidimensional challenges’ when they meet for the Fourth CARICOM SICA Summit in Belize, on Thursday.

The Summit is expected to adopt the Joint Declaration of San Pedro, with commitments to strengthen foreign policy consultation; actively collaborate on socio-economic development matters, including tourism, trade and investment; and strengthen cooperation in Climate Change and public health, among other matters.

The Heads are also expected to sign a Revised CARICOM – SICA Plan of Action adopted by Foreign Ministers of the two Regions last month, which highlights specific areas for joint dialogue and commitment to implementation, evaluation and follow-up.

United Nations Secretary-General Antonio Guterres is expected to be a Special Guest at the Summit and is expected to engage the Heads on several matters including COVID-19 pandemic response and recovery; climate change, financing for development, and the situation in Haiti.

The CARICOM-SICA Summit immediately follows the Thirty-Third Inter-Sessional Meeting of CARICOM Heads of Government, which ended today in Belize. 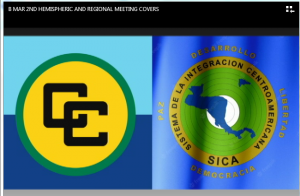