Yet another allegation dismissed by officials of the Kimpton Kawana Bay Resort.

The company responsible for the construction of the resort says talks about the resort creating an alternative road for public access while utilizing the present as part of the resort, was never been part of their plan.

Earlier this week, GBN sought clarity about a wall believed to be constructed in the public road as part of the Kimpton Kawana Bay Resort.

This was quickly dismissed and the nature of the construction was explained.

Now the said road came into question again. This time it is allegations about the total condemnation of the road on completion of the Resort, to construct an alternative route.

Speculations are that the public road will become part of the resort’s property and that public access will be prohibited; however in an exclusive interview with Eduard Lemmen VP of construction for the Kwana Bay project via telephone on Friday, he said, this has never been part of their plans.

Lemmen says they do have plans for the road, but not as indicated in speculations.

The fourth building is presently under construction which is scheduled to be complete this year.

Investment to date is over EC$150 million, with up to 240 construction jobs created. The resort which will add 133 rooms and 31 suites to Grenada’s room stock is expected to be operational in 2022, creating 300 permanent jobs. 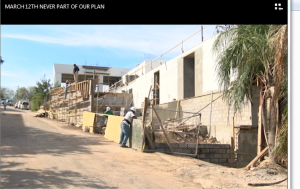