The 2018 Drug Epidemiology Network report shows no significant changes to the drug problem in Grenada, when compared to the 2017 report.

It has however listed a number of recommendations to tackle the drug issue, with the four year strategy of 2014 to 2018 coming to an end.

Two of the key recommendations coming from the Grenden 2018 report are the call for an evaluation of the implementation of the national strategy and to formulate a new national anti-drug strategy which would take Grenada into the next period.

However, drug control officer in the drug control secretariat, Dave Alexander says there is no rush to develop a new national drug strategy, as they now have to align Grenada’s program with the hemispheric strategy of the Organization of American States OAS.

“The Grenada report, which is coming out from the multilateral evaluation mechanism of the OAS, would be released in the month of June. That report would be used to inform going forward the formulation of the new strategy, so there is not a rush just yet to formulate a new strategy” Alexander says.

Alexander notes that though the strategy has expired the program continues until a new strategy is formulated.

The drug control officer says they have begun a preliminary assessment of the strategy.

Like in the 2017 report, the 2018 Grenden report shows that cannabis remains the main controlled drug produced and consumed in Grenada as well as the possession of cannabis being the main drug related offence.

According to the 2018 report the quantity of seizures of cocaine and cannabis rose by ninety eight point eight percent and one hundred and seventy three point nine percent respectively compared to 2017.

“We know from a regional level and international level cocaine is on the increase again…. And that’s very, very disconcerting” the Drug Control officer noted.

He highlights as the challenges of reducing supply rises, the new strategy would come into play.

There was an 11 percent increase in the number of people arrested 836 and 197 convicted for drug related offences in 2018 compared to 152 convictions in 2017. 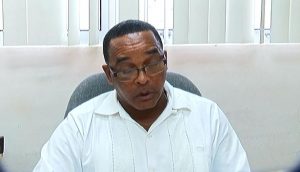