Grenada Unemployment Rate Down By 34 Percent

The announcement was made by Prime Minister and Finance Minister Dr Keith Mitchell on Tuesday.

He says there has been a further decline in the unemployment rate – it now stands at 16.7 percent in the third quarter of 2018.

The last figures given in 2018 were 23.6 percent, down from 40 plus percent when the NNP took office in 2013, according to the Prime Minister.

In addressing the state of the economy, Dr. Mitchell says the figures were shared during a recent management meeting at the Ministry of Finance, where improvement in the economy has been recorded.

The figure was based on the performance of the third quarter of 2018.

“The Tourism and Transport sectors appear to be the major drivers, which is also supported and complimented seriously by the increasing agricultural activities in the country as a whole. The construction sector continues to be because of the tremendous increase we saw last year, we may not necessarily see a massive increase in growth.” 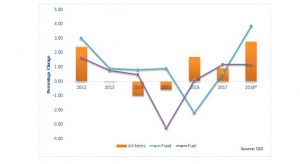