Grenada will be represented for the very first time at the regional youth parliament in neighboring Trinidad and Tobago.

Neilon Franklyn, Prime Minister of the Grenada’s National Youth Parliament, will be representing the country as a member of the opposition while in Trinidad.

The 44th regional conference of the Caribbean, Americas and the Atlantic regions of the commonwealth parliamentary association.

It will be held in neighboring Trinidad and Tobago from Tuesday, July 16.

They will be debating on topics surrounding border security.

“I think the topic is timely and important, considering what is going on in the region and around the world as it relates to migration and people moving for different reasons… whether it be social or political crisis.”

Franklyn first participated in the first sitting of the 10th annual national youth parliament back in January and the second sitting which took place last Friday.

While initially hesitant about participating in the sittings, Franklyn is now excited about the opportunities presented and is encouraging young people to get involved in activities like these.

“What it does is give government and government officials the youth perspective on a lot of issues the country is facing. We often hear people say we are the future, we are the ones to take up the  mantle after the older folks leave and now we have an opportunity where we can show our prove ourselves to the older folks that we are ready. We understand what’s going on, we appreciate what’s going on and we believe that we are ready,” Frankly says.

Being a part of the youth parliament has allowed him to develop and prepare himself for the not too distant future, when he takes on the role of a politician. 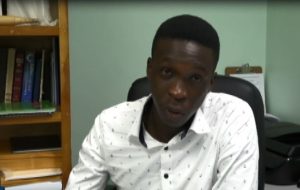