Grenada To Benefit From CARICOM Grant From Indian PM

Grenada is to benefit from a fourteen million US dollar CARICOM grant for community development projects.

The commitment was made by Indian Prime Minister Narendra Modi on Wednesday, as he headed a discussion with CARICOM heads at the New York held general assembly on climate action.

Additionally, 150 million US will go towards solar, renewable energy projects and climate change in the region.

Mention was also made of the setting up of the Regional Center for Excellence in Information Technology in Guyana and a Regional Vocational Training Center in Belize.

PM Modi, says the funding will cement the relationship between India and CARICOM.

During the meeting, a decision was taken to set up a joint task force to expeditiously look into areas of cooperation.

Dr, Mitchell, who led Grenada’s delegation to the meeting said, “India is considered a long-time friend and formidable ally in our development process. We are immensely grateful for the support provided in the past and we certainly welcome this new aid.”

The Grenadian leader echoed the description of India as an international development partner and he expressed optimism about future relations. He said, “I envision a future of greater trade and investment relations, higher levels of engagement on areas of mutual concern and most importantly, opportunities for the growth and development of our people.”

At Wednesday’s meeting, it was proposed that a joint technical commission be established to examine areas for improved relations between CARICOM and India.

The India-CARICOM Leaders’ Meeting was intended to help bolster multilateral relations between India and CARICOM.

However, many Caribbean countries have had a long history of excellent bilateral relations with India.

In the case of Grenada, bilateral relations with India have existed since 1975 and Grenada has benefitted significantly from technical assistance over the years and several training courses and post graduate scholarships have been provided

Wednesday’s developments come days after discussions between Foreign Affairs Minister Peter David and his Indian Counterpart in India, where the setting up of diplomatic presence was discussed. 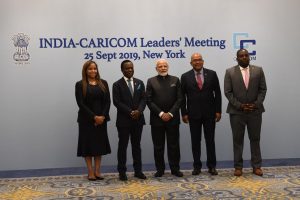 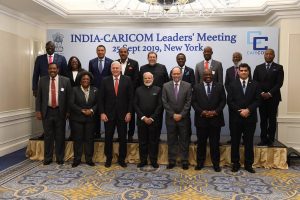 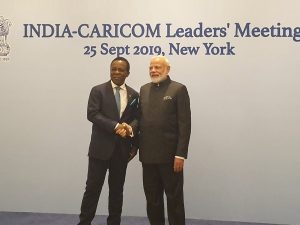 Grenada Awarded For Its Work in Climate Change