A memorandum of understanding between Grenada and the people’s republic of china was signed on Wednesday, giving the green light for the project.

The deal was sealed by Sports Minister Norland Cox and His Excellency Ambassador Zhao yongChen of the People’s Republic of China.

Ambassador Zhao says a technical team will soon be on island to conduct assessments.

Minister for Sport Norlan Cox, in expressing gratitude for China’s continued support, says several areas, structural and others will be upgraded.

Renovation is expected to begin during the latter half of 2020.

Wednesday’s signing ceremony was the second to have taken place in the last month.

The first was to undertake maintenance of the athletic stadium.

Eight engineers from the Peoples’ republic of china are presently on island and will be here for the next three years.

During this time locals will understudy them to carry on the maintenance process.

Most of the expenses for the project will be undertaken by China.

The national cricket stadium was originally constructed by the Peoples’ Republic of China.

The stadium was established in 1999 at a cost of $5 million. 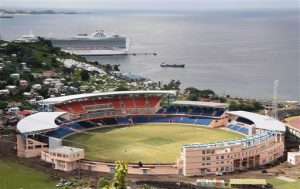