Twenty-one (21) persons including thirteen (13) competitors and eight (8) officials and supporters of the Grenada Shotokan Karate Association, attended the Caribbean Karate Championships in Guyana between August 22nd and 25th.

The event was held at the Cliff Anderson Gymnasium in Georgetown.

The medalists were: Sajany Narine; gold in both kata and sparring, Kenneth George; gold in sparring and Errol Samuel silver in sparring.

The team was coached by Ms. Claudette Joseph, Chief instructor of the Karate Association.

She was assisted by Instructor, Tisagh Chase.

David Holukoff was team manager and was assisted by other parents and supporters accompanying the team.

On Saturday 23rd August, the International Karate Diagaku, the host organization held an award and induction ceremony at the Banquet Hall of the Sleepin Hotel & Casino.

Chief Instructor Claudette Joseph who is also an Attorney at Law, was inducted into the Hall of Fame of that international body.

She was presented with an award in recognition of her pioneering work in karate in Grenada.

Ms. Joseph founded the local association 24 years ago and over the years, secured membership to various prestigious international bodies, including the Japan Karate Association and the World Karate Federation, the body recognized by the International Olympic Committee.

The association extends sincere gratitude to all who supported its participation in this event including the Government of Grenada and Ariza Credit Union.

Special thanks are extended to Senator Norland Cox, Minister of Sports, the Permanent Secretary in that Ministry and to Mr. Geoffrey Gilbert and his staff at the NLA for their support and encouragement.

Team Grenada is very pleased and honoured to have represented Grenada at this event. The karate association congratulates all its members on their performances and our Chief Instructor on attaining the rare privilege of induction into the IKD Hall of Fame. 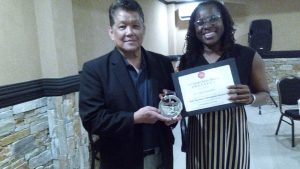 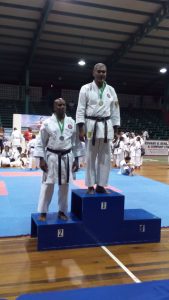 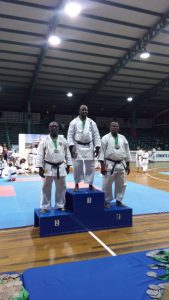