Grenada has taken over Chairmanship of  the Cartagena Dialogue (Dialogue for Progressive Action), with a call by Minister for Climate Resilience, Sen. The Hon. Simon Stiell to direct the negotiation’s goalpost towards ambitious targets, in line with those in the Intergovernmental Panel on Climate Change (IPCC) special report: “As Minister of Climate Resilience, I know I have to move Grenada in a policy direction to resilient action as quickly as possible“.

Sen. Stiell was addressing close to 60 senior level negotiators from 32 countries who participated in the critical climate change discussions known as the Cartagena Dialogue, at the Radisson Grenada Beach Resort.

The group provides an informal space, open to countries who support ambitious and expeditious implementation of the Paris Agreement, and who are committed, domestically, to becoming or remaining low carbon. It contains the most progressive countries from the group of Small Island States, the group of Least Developed Countries, Latin American states, and key European Union Member States, amongst others. These are forward-looking countries, willing to work positively and proactively together, within and across regional groupings and traditional negotiating blocs in the United Nation’s climate change convention called the United Nations Framework Convention on Climate Change (UNFCCC). The aim of the Dialogue is to openly discuss the reasoning behind each other’s positions and to explore areas where convergence and enhanced joint action could emerge.

Grenada will hold the Chairmanship of the Cartagena Dialogue (CD) up to COP25 and into 2020 which is a pivotal year for the Paris Agreement. Hugh Davis, Head of the UK Delegation said in an interview with the Government Information Service(GIS) that “While much was achieved so far, there is still a lot to be done for the Paris Agreement to come to life. The global community needs to focus on the science shared in the IPCC special report in setting ambitious targets and showing the business community that we are serious in tackling climate change and keeping the world below the 1.5° target“

The event also provided an opportunity for Grenada to showcase its leadership position in the region in terms of progress in the climate change adaptation and mitigation agenda. Grenada is currently  Chair of the OAS Inter- American Council for Integral Development (CIDI) with a focus on building resilience and reducing vulnerability and has just completed and handed over its Chairmanship of the Small States Forum (Oct 2018) and the OCES Council of Ministers of Environment (July 2018). Grenada used these leadership positions to lobby for an enabling environment for Small Island Developing States‘ (SIDS) to access assured, predictable streams of climate finance from the Green Climate Fund  and other key sources for resilience action and to keep the Paris Agreement agenda focused on the 1.5° target.

On the ground, Grenada is also at the forefront in the region, being the first country to prepare and publish its National Adaptation Plan (NAP) and to receive a Green Climate Fund financed project in the area of water management.

Mrs. Roxie McLeish-Hutchinson, Acting Permanent Secretary in the Ministry of Climate Resilience, said Grenada’s focus centered on improving access to climate finance for Small Island States as well building capacity and  increasing technology transfer, key areas in building resilience. She said: “We have to make sure that we stay the course and that our partners and the international community does not backslide on commitments made during the 2015 COP in Paris.“ 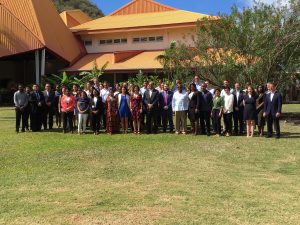 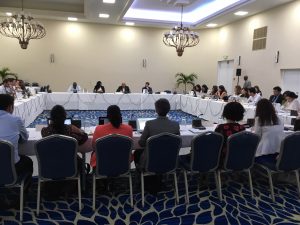