GRENADA GETS HIGH COMMENDATION FROM IMF

The government of Grenada on Wednesday received high commendation for prudent fiscal management from deputy Managing Director of the International Monetary Fund, Mr. Tao Zhang, who is currently visiting the country.

At a luncheon hosted by government, Mr. Zhang said Grenada has recorded significant breakthroughs in its economic challenges.

The IMF official noted that the policy of fiscal discipline instituted by the current administration, which in recent months has faced immense scrutiny, has helped to break a pattern of high debt and low growth.

He said “the fiscal adjustment helped cut the deficit by almost 10 percent of GDP.

It also helped reduce public debt from 108 percent of GDP in 2013, by more than 40 percentage points by now.”

Notwithstanding these positive developments, Mr. Zhang said there is need to focus on building resilience.

He noted the focus on post-disaster recovery should be supplemented with better all-around preparedness.

Prior to Wednesday’s luncheon, the IMF’S deputy managing director and his delegation met with the Prime Minister and Minister of Finance, along with the Permanent Secretary in the Ministry of Finance, Mrs. Ophelia Wells-Cornwall and other

representatives from that ministry.

They also had separate discussions with representatives of the Bankers Association. 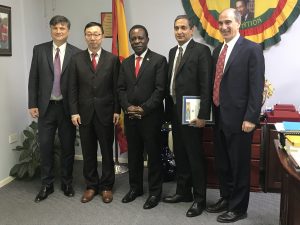