Grenada Calls for Creation of SIDS Foundation at UN

Grenada used its voice at the 74th session of the General Assembly of the UN in New York to call for the development of a small island developing states (SIDS) foundation.

Minister for Foreign Affairs and Labour, Peter David issued the calls while addressing the general debate of the assembly last weekend, highlighting the impact of recent hurricanes on Caribbean countries as a reason for this foundation.

Grenada’s delegation to the summit was led by Minister of Climate Resilience and the Environment, Simon Stiell and includes three youth delegates and two technical support staff.

Grenada’s plans for developing St. George into a Climate Smart City were presented in New York last week, at one of the events organised as part of the United Nations Climate Action Summit.

The engagements were intended to encourage countries to increase their efforts to combat climate change. 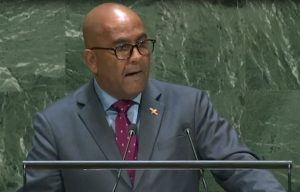