GRAVEL AND CONCRETE WORKERS BACK TO WORK

On Thursday 17th December 2020, the workers protested against managements’ refusal to honor the company’s collective bargaining agreement to pay their yearly profit shares.

Gravel and Concrete workers attached to Queens Park, Mt. Rush, and Telescope outlets are back at work as management give in to the demands of its employees, to honor the company’s collective bargaining agreement.

Based on the collective management, article 24, the company agreed to make 15% of its net profit payable to workers on or before December 15th yearly but refused to do so in the early days of last December.  This led to protest action from all workers with the full support of their union representative.

President General of the Technical and Allied Workers Union (TAWU) Andre Lewis says workers received their monies and are back preforming their various duties.

Meanwhile GBN has unconfirmed reports that 15 workers employed by Aviation Services of Grenada Ltd. at the Maurice Bishop International Airport were laid off. If confirmed to be true, this will bring the number of employees to be sent home by the organization in the past 3 months to 31, as 16 were served termination letters last November.

TAWU which also represents some ASG workers told GBN when questioned that he is yet to confirm the details as he needs to consult with workers first; but noted that he too heard this information.

In October workers at AGS engaged in industrial action over payment of salaries. To date ASG and Union representative Bank and general workers union has not come to an amicable solution on this and other issues. GBN spoke to Joseph Mitchell Bank and general workers union representative who said the union is unable to make comments at this time as they are yet to meet with ASG management and workers on the matter. 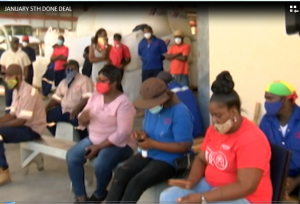