Nutmeg and cocoa farmers can now breathe a sigh of relief as the Cabinet and the National COVID-19 Committee have given the green for the sale of nutmeg and cocoa from next week.

However, the final outcome was not without controversy as hours after the announcement government issued a release condemning the actions of the two associations representing cocoa and nutmeg farmers.

In a release just around midday on Wednesday, the ministry of agriculture says it was surprised by claims which it calls premature, of the two associations not being given the clearance to operate.

According to the ministry’s release, they initiated discussions on the potential impact of COVID-19 in March with the associations which led to a revised proposal being submitted on April 22nd.

In the joint release on Monday, the associations claimed that nutmeg farmers had suffered an estimated loss of 1.5 million while cocoa farmers lost approximately 1 million dollars.

Calling the lack of clearance to buy from farmers unfair and unreasonable, the associations requested financial support for their workers and to buy farmers’ produce.

In response, government said they are not unwilling to provide financial support despite the constraints, however blasted GCNA and GCA for their lack of business acumen and failure to modernize operations to ensure profitability and well-being of farmers. 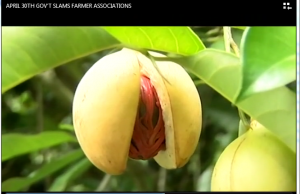