Government is taking partial responsibility following recent talks that one former Senator is still in possession of and utilizing a cellphone belonging to government and incurring a bill to the tune of twenty two thousand dollars.

Minister of Trade, Industry, Co-operatives & CARICOM Affairs, Oliver Joseph, says that while former employees attached to government have a responsibility to return government items before demitting office, the onus is also on government to ensure rules are adhered to.

The issue was addressed during Tuesday’s Post Cabinet briefing.

“While the onus is on the person who leaves the system to return phones, it is also incumbent on the ministry or the persons responsible to undertake regular reviews to prevent instances of abuse.” Minister Joseph said.

He further clarified “in other words if you working in a Ministry and you no longer in the service of Government, if you did not return the phone, then the Ministry should take steps… its very simple to notify Digicel that you no longer in this position therefore they should discontinue your service…. But apparently that did not happen and you had individuals who are outside of the service with the phone. While as a Government we must take some responsibility, the person also have the obligation to return the phone when exiting the public service.”

As to how the service was allowed to continue despite racking up thousands of dollars, Joseph had this response.

“Government has a longstanding policy of providing cellphones to Ministers and senior public servants, the bills of which are part of a bundled packaged with Digicel. Periodic reviews are conducted by the Ministry responsible for Cellphones and last week Government initiated a meeting with representatives from the service provider, Digicel, to examine costs and to ensure Government is getting value for money with its current arrangement. Under the arrangement there is a cap for for every user of Government phone.

GBN has reached out to the individual named in this accusation and is awaiting a response.

Meanwhile, reports that the NNP member has been asked to resign from the party have been rubbished by the Press Secretary. 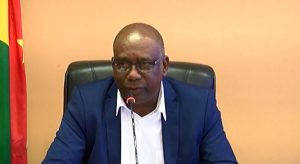