Salary talks between the Government Negotiating Team (GNT) and the joint negotiating union team of Public Workers Union (PWU) and the Technical and Allied Workers Union (TAWU) became stalled and deadlocked at the third session which took place on Tuesday, October 8, 2019.

The unions are insisting on a near 25% increase in pay, without providing a shred of written justification for their demands. Those demands would increase the Government’s expenditure on salaries by more than $90 million over the next three-year contract cycle.

The demand is highly unrealistic and far exceeds any such payment of salary increases locally and in the region, including lucrative businesses in banking and other areas of the private sector, with which TAWU and other unions have signed.

During the last contract cycle, workers received increases every year during 2017 to 2019, amounting to 10% compounded increase over the period. The unions’ current demand, amounting to 150% of the previous settlement, is unsustainable and unprecedented.

By comparison, in Barbados, after almost eight years of no increases, trade unions accepted a 5% one-off increase, without back pay, while at the same time having to face increased rates and other taxes.

The unions’ demand for a near 25% increase in pay will overturn all of the sacrifices made by the country to achieve fiscal stability and economic growth. Millions of dollars in grants and concessionary loans currently secured by Grenada would be extinguished; programmes of house repair and training programmes for the youth and labour assistance to farmers would have to be cut and this would also significantly reduce the assistance Government provides to homes for the elderly and any wage increase which would go to workers there.

Additionally, Grenada will have to resort to measures applied in neighbouring Barbados and hundreds of public officers would have to be retrenched, something which the Government of Grenada has successfully avoided. Worse, those demands would trigger an inflationary spiral and lead to a flight of direct foreign investment from the local economy leading to job losses in the private sector and a return to high unemployment and fall in family incomes once again.

Since June, the GNT circulated to the unions its Policy Guidelines for Salary Increases which emphasised that salary negotiations must be fact-based and within the Fiscal Responsibility Law.

In an earlier letter to the unions, the GNT warned that this unrealistic demand “raises the question of good faith collective bargaining.” It also counselled that “One ought not to come to the table with demands which are financially impossible for an employer to meet.”

In its letter, the GNT requested that the unions revise their demands within reason and reminded them that by law, negotiations should be concluded on salary increases by October 31 in order to meet inclusion in the budgetary allocations for the fiscal year, 2020.

The GNT proposes an increase to public officers of $26.5 million, as part of an overall package where the state has already made additions to the restoration of pensions to appointed, qualifying public officers. Additionally, the state would have to meet further increases through increments to those public officers whose contracts of employment would now be of an unspecified period, giving them permanent tenure.

On the issue of fringe benefits which is yet another expense for the state, the GNT pointed out that the upcoming comprehensive job evaluation carded to commence soon, would see further increases in the salary of public officers, in addition to the negotiated increases. Therefore, increases to and additional fringe benefits negotiations cannot be entertained before the job evaluation exercise. In effect, public officers will receive three streams of increases in 2020.

Thus, the unions’ failure to adopt a realistic and reasonable stance in Tuesday’s negotiations, has resulted in the salary negotiations being declared deadlocked. Under the provisions of the Collective Labour Agreements as well as the Labour Code, the dispute has been referred to the Ministry of Labour for conciliation by the Labour Commissioner. 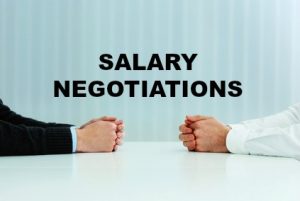