For the next two weeks, Her Majesty’s Prison will be Jonathan Richards place of residence.

The Twenty-six-year-old Gouyave, St. John, resident has been charged with two counts of attempt to commit non-capital murder and one count each of possession of a firearm and possession of ammunition.

Richards has been remanded after making his first appearance at the Gouyave magistrates’ court on Tuesday, one day after he was officially charged for the crimes that resulted in an eleven-year-old child receiving a gunshot wound to his arm.

Those charges were laid against Richards by officers of the criminal investigation department, Gouyave police station, on April 26th, 2021.

On Saturday police issued a wanted man notice and was subsequently detained.

According to reports, Richards sought representation from attorney Arlie Gill.

Richards next court appearance is set for May 11th, 2021. 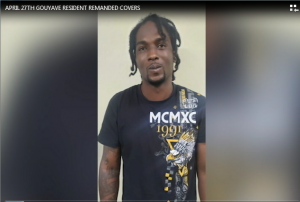 NEW GUIDELINES FOR VISITING THE ELDERLY