It is becoming a climate for industrial actions by unions and the members they represent against employers for salary and safety at the workplace issues.

The Gouyave processing station is seemingly always in the spotlight and recent developments have triggered the workers to picket in front of the station during lunchtime on Thursday.

The non-payment of NIS unemployment benefits due to workers at the Gouyave Processing Station since last year has brought on another wave of industrial action in the country.

The public officers’ plight which has sparked a fiery path across Grenada was felt in Gouyave as workers at the nutmeg processing station say they are not backing down from their employer.

Field Officer for the Bank and General Workers Union, Joseph Mitchell, explains that in October it was brought to their attention that workers at the station were denied the opportunity to receive NIS unemployment benefits.

He says it’s an unfortunate but necessary fight noting that workers have also been complaining of poor working conditions and not being provided with proper protective gear.

Mitchell says the situation escalated with the GCNA management avoiding a meeting with the union.

He says they were even denied access to host a meeting with workers inside the processing station.

The union says they are prepared to intensify industrial actions if necessary. 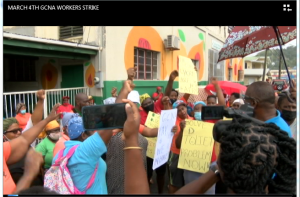