With the prime ministers’ political career spanning over three decades, many are of the view that he will exit his seat sooner rather than later.

Past statements made by the prime minister himself said so.

Speculations fly as to whom he will hand over leadership of the country too, if this was to take place.

Well a response was provided by the PM when the question was thrown at him by one member of the media on Thursday.

To reinforce his stance, the PM jokingly expressed his physic.

Dr. Mitchell is the longest-serving Prime Minister Grenada has ever had, holding the office for almost 19 years. 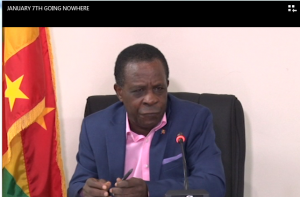