“God sent you” said the daughter of missing woman Cecilia Mungo to the puppy that discovered the human remains at Mardi Gras St George on Tuesday.

Karen Mungo was called to the scene by police officers after the discovery as means of identifying any particulars that may belong to the missing woman; however it remains unknown whether the remains match that of her mother.

Just after 1pm police received a report from Mardigras resident Ian Julien, the owner of the dog, after the animal discovered the bones of a human body in the bushes, where he went to tie out his sheep.

Julien said he was just thinking about training the pup to hunt when the discovery was made.

Several lawmen including members of the Criminal Investigation Department and a pathologist were on the scene when GBN arrived.

Forensic evidence was collected which may suggest or confirm the identity of the remains.

The question remains whether or not the RGPF should commission a canine unit for events such as these. 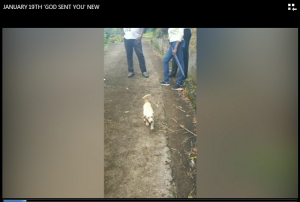 AN ASSET OR A LIABILITY