The GFA 5 that provisionally set aside president Chenny Joseph, says their decision stands, despite a decree from world football governing body FIFA, which stated the grounds for dismissal were baseless.

Second VP Patrick Francis, in an unsanctioned GFA press conference, told the media they were well grounded in the decision taken to suspend Joseph.

An earlier release from acting president Allan James said the five executive members were acting on their own accord and their actions, including today’s press briefing which was not allowed on GFA premises, were not GFA sanctioned.

Today’s press update was held at the national stadium.

Meanwhile, Director Randy Campbell did not deny talks that he is soon to resign from the GFA executive.

He told the briefing he had ‘no intention to separate himself from the 5’ but admitted he intends to demit office very soon.

FIFA’s position is that the case that was used in the provisional suspension did not include criminal charges and as such did not warrant an investigation, as per their statutes. 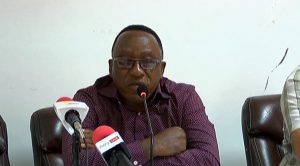 GRENADA GETS HIGH COMMENDATION FROM IMF