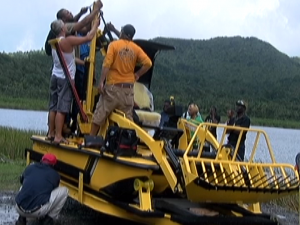 13 individuals will be trained within two days, in the operation of a new machinery to aid in the removal of reeds around the Grand Etang Lake.

Back in 2010, efforts were made to have the reeds removed from the perimeter of the Grand Etang Lake, however, the reeds had begun covering a portion of one of the most frequently visited tourist sites.

In the last 9 years, the growth of these water plants has increased significantly.

On Wednesday trainees, government officials and other stakeholders were on site, as the machine was thoroughly inspected for the training to commence.

Trevor Thompson, focal point for IWASP, the international water storage program, said the training crew is eager to learn and he looks forward to a productive two day exercise.

He noted that the clearing of the reeds is expected to take 30-40 working days to complete.

The machinery is valued at an estimated 100 thousand euros and was funded by IWASP through the UK and German governments.

LOOKING AT THE FROC REPORT