While the hovering question of why the oxygen plant at the general hospital was left unfixed for almost two years remains unanswered, one thing is for sure, Grenadian lives are once again being saved by a United States intervention.

The US naval ship Comfort was first alerted sometime last week by US Embassy personnel that an emergency supply of oxygen was needed, as the routine shipment from Trinidad was delayed.

Two consecutive delays of the routine shipment prompted the commanding officer of the USNS Comfort military treatment facility captain Patrick Amersbach to intervene and donate 16 tanks of oxygen to the General Hospital, while also making repairs to the oxygen plant.

Grenada is now expected to save tens of thousands of dollars, having to no longer rely on the tri-weekly shipments of bottled oxygen from Trinidad.

After two days of combined efforts by marine technicians aboard the USNS Comfort and local hospital techs, on Thursday September 19th the plant returned to life, generating 97% pure oxygen.

Director of Hospital Services Dr. Carol Mc Intosh had confirmed to GBN in April that the plant had been dysfunctional for over a year. 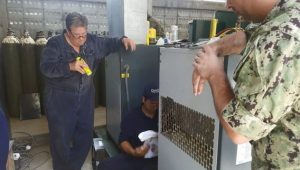