As the world celebrated international women’s day on March 8th, the plight of one woman is now being shared on the back of her sibling.

Cognizant of the theme “women in leadership” laurel Bain the sister of Gemma Bain-Thomas sought to make her sister’s plight known at the highest levels.

Gemma Bain-Thomas has yet to receive a dime from the government of Grenada after the court awarded her compensation for being unconstitutionally removed from the public service.

Serving as Secretary to the Cabinet up to 2014, the OECS Court of Appeal in 2017 declared that Mrs. Bain-Thomas was unconstitutionally removed from her position and the public service.

The OECS Court of Appeal ruled that she be compensated for the wrongful termination while the High Court of Grenada in 2018 awarded compensation for general and vindicatory damages.

Laurel Bain, sister to Gemma Bain-Thomas, has challenged and sought the support of UN Women Caribbean and the UN Office for Human Rights.

Bain tells GBN she chose this path due to a lack of response from the accountant general as well as a letter to the Prime Minister who oversaw the Ministry of Finance.

Mrs. Gemma Bain-Thomas confirms to GBN that they are still awaiting a response to a counteroffer made in April 2019.

Mrs. Gemma Bain-Thomas says she is encouraged by the support from her family and friends in her fight for compensation.

In the letter marking International Women’s Day, a special appeal was made to the seven women in cabinet, Governor-General Dame Cecile La Grenade, and other conscious-minded women. 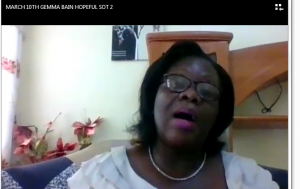