The forecasted drastic increase in gas prices has become reality as Russia’s invasion of Ukraine has thrown the rest of the world into a tailspin.

Private Sector Senator Christopher De Allie earlier this week said they were looking on with concern as the potential war will have dire effects on Grenada’s economy.

One of the worst possible outcomes following a global crisis has been realized as Russia officially began its invasion of Ukraine early Thursday morning.

World food prices, inflation and increased cost of freight are factors countries such as Grenada are already facing due to the recession caused by the Covid-19 pandemic and it is now compounded by the Russian war on Ukraine.

Private Sector Senator Christopher De Allie in an interview earlier this week had pointed to the Cap on Gas Prices as one of the areas that may be impacted.

He believes the Grenadian economy cannot sustain such a situation for a long period especially for local businesses heavily dependent on the industry.

According to Reuters, Oil prices jumped on Thursday, with Brent rising above $105 a barrel for the first time since 2014, after Russia’s attack on Ukraine exacerbated concerns about disruptions to global energy supply.

ABC 13 is reporting that with the United States to implement economic sanctions on Russia, it means even higher gas prices which will be sudden and significant.

GBN reached out to Energy Minister Gregory Bowen to find out whether Grenada will be able to sustain the $15 Cap on local Gas Price, which was implemented in December.

However up to newstime, a request from the Prime Minister’s Press Secretary for an interview with Minister Bowen did not materialize.

Meanwhile, Private Sector Senator Christopher De Allie prior to the invasion of Ukraine by Russia indicated that the situation is strong signal for Grenada to push forward with renewable and alternative sources of energy.

Senator De Allie said such a move will reduce the effects of rising oil prices due to what has transformed into an invasion on the local economy.

He noted that as countries go into renewables and reduce dependency on fossil fuel, oil companies will seek to make as much as possible. 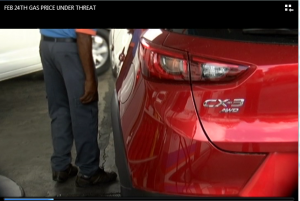