Energy officer John Auguste says Grenada saw no reason to be represented in the recent meeting with Global Petroleum group GPG and National Gas Company NCG, as the agreement was signed since in April last year.

Bombarded with questions during the weekly post cabinet briefing, Auguste sought to give some insight into Grenada’s Oil and Gas dealings.

With a gag order clouding the details surrounding the deal and how exactly Grenada would benefit from the agreement, Auguste told the media that royalties are due to be collected, increasing incrementally in the long term.

In addressing concerns that Grenada was not represented in the recent meeting in Trinidad between GPG and NGC says this was so because it was not one of much significance.

However, the energy officer says they were in attendance during the official signing last year.

He adds that no signature has been attached for the construction of gas lines from Grenada to Trinidad, however a Chinese company based in Texas is in charge of designs.

The Energy Officer, who retired last year and is engaged contractually, also noted that the current oil and gas exploration is guided by the Grenada Petroleum and Natural Gas Deposit Act. 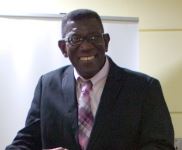