After spending over one year at her majesty’s prison in Grenada, an African national asylum seeker has been set free with the help of his lawyer.

After months of discussion with government, Anthony at law Herrica Willis says she and her clients are happy with the ending results.

The African national who was never named came to Grenada in August of 2019 seeking asylum.  On his arrival at the Grenada Red cross the relevant authority was notified of his situation.

However some concerns arise and instead of finding freedom the asylum seeker was sent to jail for 7 days initially; this later turned to over a year. During an exclusive interview with GBN on Monday, Willis said her client whose identity remains protected is happy that he is free with the help of many.

Grenada presently has no laws in place for people seeking asylum in the country, Herrica hopes that what happened to her client can change this.

Her client along with another asylum seeker who arrived in Grenada in MARCH 2020 will leave the island in the coming weeks. 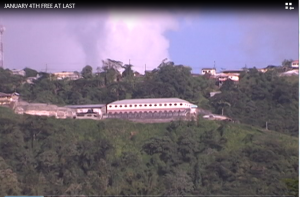 GRAVEL AND CONCRETE WORKERS BACK TO WORK