Fire fighters responded to a mid-morning fire on lower Lucas street St. George. This had employees in business in close proximity scampering out in shock.

The fire occurred in an abandoned building adjacent to the police traffic box and between praise the lord tabernacle and KLS Sports Bar.

Scores of onlookers crowded the streets as fire engulfed what is believed to be an un-occupied building on Lower Lucas Street St. George around after ten Thursday morning.

The building is believed to be one of the oldest in the city. People who grew up in the area in the 1940’s said reports from their parents suggest that it pre dated them by more than forty years.

GBN was told that the structure was purchased by the Catholic Nuns and plans are ongoing to have it converted into a laboratory for the neighboring St. Joseph’s Convent.

Sister Lucy Gabriel of the Roman Catholic Chancery was among persons who gathered on the street as anxiety mounted that the fire could spread to other buildings.

There was no electricity in the building and speculation is rife about the possible source of the fire.

Several abandoned buildings and others which are not in use by the owners are sometimes occupied by homeless people.

When fires like these occur, fingers get pointed in the direction of dis-placed persons.

Superintendent of Police Vannie Curwen says they are aware of the challenge and while they are not casting any aspersions, various agencies will need to work together to alleviate this problem.

GBN understands that students from the  St Joseph Convent and the St. Louis RC girls school, who suffer from  respiratory illnesses, were sent home as a precautionary measure.

The  cause of the fire is under police investigation. 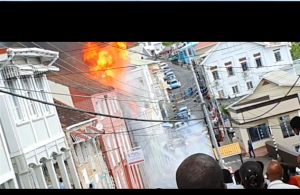