The fire department has been feeling the heat from social media users, after 4 structures in Cherry Hill were burnt on Saturday.

Saturdays’ fire at Cherry Hill totally demolished two buildings and damaged two others, leaving many questioning the response mechanisms of the fire department.

Concerns ranged from the use of fire hydrants, to the availability of fire tenders to respond to emergencies.

Officer in charge of operations on the day, Sargent Adrian Panchoo on Monday told GBN he saw the social media bashing but the reality is that the appliance at the Maurice Bishop International Airport is unserviceable.

Once flights are in, as in the case on Saturday, the service on the airport must be on standby.

He says one of the first challenges they encountered on reaching the scene in Cherry Hill, was that both structures on fire still had electricity in them, which could have been life threatening to firemen applying water.

He explains that different fires may require different methods of extinguishing.

‘Most people just assume that when the firemen get on the scene immediately is to just start throwing water, however we have to ensure the area is safe. I made an assessment and realized there was still electricity in both properties.  At the end of the day what we are trying to accomplish is getting the water where the fire is, however at the point when the water hit the building it is not in contact with the branch, in that case electricity wouldn’t run down and electrocute one of my personnel”.

Sargeant Panchoo noted that thought the firemen got into action, their lives were at risk with the power still on.

He said it wasn’t until after the first load was completed that Grenlec’s personnel came and extinguished the electricity.

To put out an electrical fire most times an ABC or a carbon dioxide extinguisher. The Sergeant explained their appliance is not equipped with either.

The firemen’s only weapon is water, most time accessed through fire hydrants and those are based on the availability of supply.

In this case, he says the hydrant closest to the National Stadium guaranteed a greater supply in a shorter time span.

The officer admonishes people to practice safety at all times by ensuring electrical appliances are plugged off when leaving their homes, as well as adhering to the no burn policy now in effect.

Structural fires for the past week remain under investigation the fire official says. 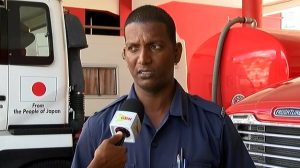