Farmer Loses Over Fifteen Thousand To Vandalism and Praedial Larceny

Two River Sallee residents are counting their losses, as perpetrators destroyed over fifteen thousand dollars’ worth of produce on their farm over the weekend.

A threatening note was also left for the farmers, after most of their October to December harvest was left in ruins.

Jillian Drakes who have been farming for most her life, was greeted by an unsightly scene on her farm in River Sallee over the weekend.

Drakes said she has been plagued with praedial larceny in the past, but this is the worst attack on her farm to date.

An estimated 15,000 dollars of produce was destroyed.

The perpetrators stole a quantity of Melons, Pumpkins, Sorrel and Green Peas and sliced open the remaining fruits and legumes, laying waste to the farmers’ crop.

Tyson Phillip, another farmer affected by this attack, spoke on what transpired over the weekend.

He says though he has encountered praedial larceny in the past, it’s the first time he has experienced someone chopping up all their crop.

A profanity laced death threat was also left for the farmers along with the destroyed crop. 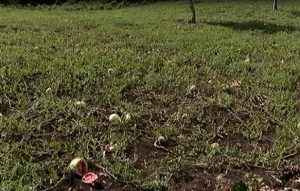