Minister for Social Development Delma Thomas says reports of illegal operations conducted within Government’s SEED program under her Ministry are fake news, meant to paint the Government in a bad light.

A high court judge in Grenada has started hearing a case brought against the State by a female Permanent Secretary who leveled allegations of “ghost payments” being made under the SEED program for the poor and vulnerable in the Ministry of Social Development.

According to the former Finance Minister, it appears from the case that some people in the government “were playing around with SEED (money) and she (PS Charles) decided to put an end to it”. – UNQUOTE-

Minister for Social Development Delma Thomas says the SEED program follows strict procedures and guidelines which have always been effective.

She questioned whether the accusations were a reflection of the accusers’ behavior. 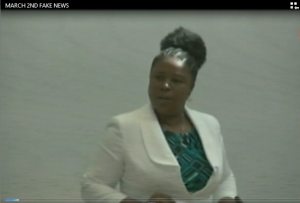