Another incident within two weeks in which a minibus lost control due to a dysfunctional braking system has occurred over the weekend.

This time however no life threatening situations were recorded.

“It could have been worse” says one eyewitness, following an accident which involved six vehicles.

On Sunday, the six vehicles lay entangled along the Mardigras, St Paul’s road, after the driver of a dark green minibus apparently lost control and crashed into a moving Subaru branded vehicle directly in front.

One eyewitness who chose to remain anonymous says the bus which slammed into the Subaru got stuck and both vehicles then crashed into the vehicles parked on the side of the road.

The eyewitness who is also the owner of one of the vehicles, although distraught by the damage to his vehicle, tells GBN that he is elated that no deaths were recorded.

GBN up until news time got no confirmation from the Police’s Community Relations department as it relates to the seriousness of the injuries.

However, according to reports, several of the passengers who were on their way home from church sustained injuries and were hospitalized. 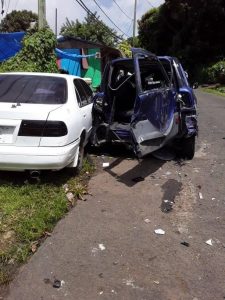