June 1 marked the commencement of the 2019 hurricane season however the final list of emergency shelters has yet to be collated and released to the public.

During Tuesday’s weekly post cabinet brief, Information and Disaster Management Minister Winston Garraway says an apparent lack of engineers is the cause for the delayed release of the final list of emergency shelters for the 2019 hurricane season.

Senator Winston Garraway says although the inspection of all shelters has been completed, they were hard-pressed at times with the limited number of engineers on island to form a comprehensive team to inspect the shelters.

“In the inspection team you have an engineer, you have a fire chief, you have somebody from social development, you have someone from the chief of the team who is also a builder/contractor in that sense. So you have a team of persons from various fields with the competencies to ascertain that buildings are safe to accommodate persons should the need arise for a shelter to be activated.” Garraway explained.

He said that with a number of government projects ongoing, engineers were stretched between participating in the inspections and conducting their other tasks.

Senator Garraway expected the final list to be announced next week as the reports from the inspection teams are due at the end of this week.

111 shelters were approved last year and these are available if the need arises.

“What we do every year is an inspection of these shelters, to ensure the integrity of the structure is not compromised, just to give us a piece of mind to ascertain that those shelters are up and ready for use. So we have shelters, if there is need now to activate any shelters we have shelters available,” Garraway assured.

A normal hurricane season is forecasted with thirteen named storms, five likely to develop into hurricanes and two into major hurricanes.

People with disabilities and the elderly now have ease of access to emergency shelters on the sister island of Carriacou.

Dover Government School is the first of fourteen emergency shelters to be outfitted with equipment to make access easier for the physically challenged.

The equipment was handed over during a ceremony on Wednesday. 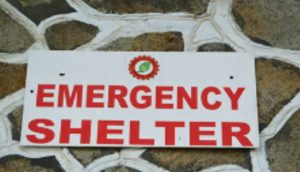