Onlookers would cringe after looking at the front compartment of this concrete truck which was nearly crushed.

However, reports are the driver did not sustain any injury and was not in the concrete truck which was filled with material when the incident occurred on Thursday.

Reports from the men working to remove the truck on Friday are that the driver encountered difficulties on the way to a project in Egmont close to the entrance to La Phare Bleu.

According to the reports, the truck which was parked on a hill started rolling backward before capsizing twice. The truck was lodged in an entrance road, blocking residents from accessing their homes, when GBN arrived at the scene.

GBN sought a comment from Kenny’s Trucking and Equipment Services which is said to be the owner of the truck however was told there was no senior personnel available at the time. 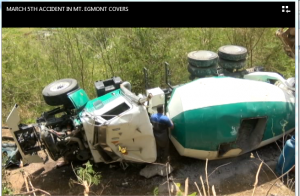