Buses plying the number 6 route through Grand Etang, were diverted through Byelands as the Balthazar river overflowed its banks.

Vehicular access was also impeded by major land slippage in nearby villages.

Sergeant in charge of the Eastern Division of the Traffic Department Aaron Thomas says the inclement weather impacted traffic flow between the Eastern and northern corridors.In the town of Grenville, work at the Magistrate’s Court was curtailed as the lower level of the building was flooded.

Most of the streets were rendered impassable.

There were diversions through several by-roads and adjoining villages.

Members of the Fire department were called into active service and they were seen clearing the streets of residual debris. (DayBREE) 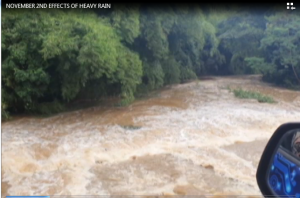