During a recently concluded panel discussion on rebuilding Caribbean economies, ECCB governor Timothy Antoine stated that skills and not subjects should be the focus of the education systems in the region.

According Mr. Antione, more emphasis needs to be placed on vocational studies and not subjects.

He says it’s an area the region is deeply behind on and finds it difficult to accept that the region brags about the amount of subjects students receive, but without skills remain unemployable and cannot connect with the labour market.

He says in many countries the youth unemployment rate is double the national average.

He was at the time engaged in a panel discussion on rebuilding Caribbean economies in Barbados.

Meanwhile, an official from one of the institutions on island that facilitates the training for students in skilled areas, the New Life Organization (NEWLO), confirmed that the number of trainees enrolled at the institution has been growing rapidly.

Lorna Douglas, marketing manager of the NEWLO, said the organization has been doing exceptionally well in the training of students, equipping them for the world of work.

The internship program has resulted in a number of permanent placements for students.

According to Douglas, at present the institution has over 250 trainees. 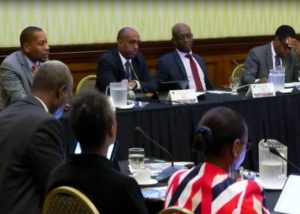 CELEBRATING 40 YEARS OF THE GRENADA REVOLUTION