Prime Minister, Dr. the Right Honourable Keith Mitchell on Tuesday presented awards to the artistes who represented Grenada at the recent International Soca Monarch in Trinidad and Tobago.

Making the presentation at the Post Cabinet Press Briefing, Dr. Mitchell said all the artistes are winners. “While only some of you received awards at the competition, I want you to know that you are all winners. I want to be very clear on this, I didn’t see any losers. I consider it to be a tremendous achievement by you guys. As Prime Minister, I am happy to see what you guys have done for this country, I don’t think we would ever be the same again. I have received all sorts of commendation from the leaders of the region on your behalf.”

Congratulating the artistes for their recent achievements, the Prime Minister said, “You guys have done us extremely proud and the image of the country internationally has been lifted. We have been having some major successes in the country with respect to the economy and this certainly adds another dimension to it.”

Dr. Mitchell also noted that the success of the artistes would bring economic benefits to the country. “When we are investing in culture and in sports, the implications of the investment must be understood; we may put a few dollars into an activity but in return, we can get millions because of the success of what we have invested in. I think our carnival will get a lift this year because of your achievements; in fact I expect to see larger numbers of persons visiting for carnival this year.”

In a moving acceptance speech Grenada’s first ISM winner, Hollice Mapp, know to fans as Mr. Killa, says it was a dream to meet the prime minister, jokingly mentioning ‘now I’m is sitting in his chair’, while encouraging fans and artistes to keep pressing on and fighting for their dreams. 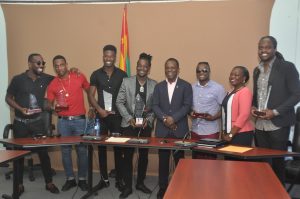